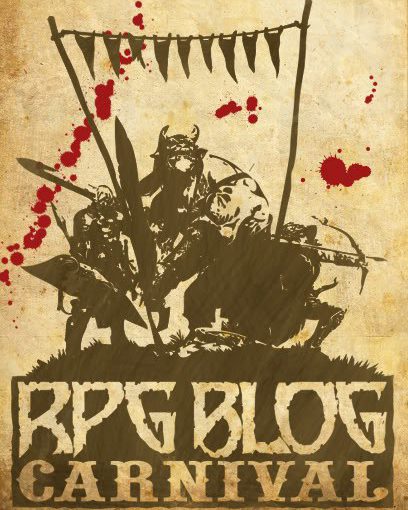 This article is being posted as a part of the RPG Blog Carnival hosted by RoleplayingTips.com. As an aside, it was only after I submitted this article that I realized that this round was to be about Premade Adventures, and in all honesty, I’ve never run one. Heck, I never played one. And on that note, I’m bad at following directions.

Some adventures have something happen that you’ll never forget, something that becomes a repeatable reference that is brought up for years to come. Every group has at least one of those moments, whether they are in or out of character. Today, I’m going to tell you about one of those moments, an out-of-character that’s defined the group for years to come.

I was a guest GM in a campaign where I was normally a player, to allow the main GM to prepare for the next story arc (This is also a good technique to use if the GM needs a break ). The regular GM became a regular NPC as a player for an offshoot adventure. And all-in-all it was a great mod. It was the first time our group had to deal with a character death, it had a pretty awesome soundtrack set up, and it was the first time I ever tried Combat by Scene with great success.

This story isn’t about that.

This is a story about a mystery that was going to be uncovered over the course of the adventure. A grand, multi-faceted secret, which I had set up 15 clues for the players to uncover.

And how the regular GM, destroyed the entire mystery in the first 10 minutes.

The PC’s were en route to a new city when they happened upon the hidden city of Charmouth, a city untouched by time for over a century. Giant stone guardians surrounded the small city, facing outward, showing their age by weathering, with vines growing around them. The characters were able to pass by the guardians, to enter a quite pleasant-looking town. The PC’s were starting to feel at ease and loosen up from their rough journey.

Until they talked to their first villager. There was something off about the villagers. The transcripts went something like:

VILLAGER: Greetings and Salutations Friend! We do not get many travelers coming to the city. Can I assist you in your day?

PC: Uhh, sure. Can you point me to the closest Inn?

VILLAGER: I am sorry, Friend. We do not get many travelers coming to the city. We do not have an Inn. Perhaps you should talk to the Mayor.

PC: We probably don’t need to see the Mayor, just looking for a place to sleep for the night.

VILLAGER: I am sorry, Friend. We do not get many travelers coming to the city. We do not have an Inn. Perhaps you should talk to the Mayor.

The players commented on the weirdness and moved along to the next villager. They had the same conversation. Exactly the same conversation. At this point, the players were probably thinking: “Okay, Fine. We’ll bite onto your plot hook”. After a small bit of searching, they end up running into the town’s Mayor just coming outside of the health clinic.

At this point, one of the players rolls a Nat 20 in perception. All right, I got this. I start in on a bit of narrative “As you approach the Mayor, he coughs into his handkerchief. Pulling it away from his mouth you notice a few drops of blood-”

Of course, he was right. It absolutely was a Vampire. I mean, I still had 13 more clues to give out, so everyone else would have figured it out eventually too. So, I guess it wasn’t the reveal I was going for, but it was memorable.

Now Vampire is a verb. To this day, when players figure out a puzzle with almost no information given, is now referred to as that player “Vampiring” the GM. It took some time later, but I eventually got to Vampire that same GM that got me.

Have any of you ever had a moment of being “Vampired”?

One thought on “You Vampired Me!”