Dawn your jackets, and strap on your snowshoes; an icy adventure awaits you in the frigid land of Whitefaire. Political tensions are running high, the entire region is on the brink of war. That, combined with the brutality of nature, do you have what it takes to survive in this frozen wasteland? Find out in our Whitefaire Adventurer’s Guide Review.

“Disclaimer: The writers cannot accept any responsibility for unfortunate character deaths involving, but not limited to, falling through cracks in glaciers, collapsing through ice sheets, being buried in avalanches, freezing to death in the snow, being consumed by a frost-troll, falling victim to an white-dragon’s breath attack or other cold related demises. In addition, being murdered by traders for any amber which is being transported is the character’s own fault, and not the DM’s. You should have passed that perception check.” – Excerpt from Whitefaire Adventurer’s Guide

Whitefaire Adventurer’s Guide is a new sourcebook written by the Dark Peaks team for Dungeons & Dragons 5th Edition. And it hits all of the hallmarks needed for a new campaign in a brutal wilderness in the Faerun setting. This 96 page sourcebook comes in full color, in the traditional D&D style. Rules for the arctic environment, and the dangers thereof, help to make adventuring feel brutal without simply being a single Survival roll every time your party travels. Blizzards, ice climbing and snow sled travel are all daily occurrences in Whitefaire.

The lore of Whitefaire is really what made it stand out. The region comes with several maps of prominent cities in the northern lands. There are numerous political leaders, each with their own spheres of influence, goals and ideals. While many struggle to make ends meet on dangerous missions putting their lives at stake, there are countless guilds and companies that will do anything to turn a profit.

The basis of the economy of Whitefaire is the mining of Whitefaire Amber, a magical gemstone sold for a high profit. In addition to being incredibly valuable, it is also exceeding rare, and even more mysterious. It contains a magical power all it’s own that makes it able to hold and retain magic, boosting the effects of magical items. Some are even able to use these as a source of rechargeable scrolls, making these precious gems as functional as they are beautiful.

There are also various factions vying for power, though the most notable is the Reagent’s Amber, Fur and Timber Company, or the RAFT for short. The RAFT is known for their monopoly on trading throughout the region, dominating the control of the Amber trade. Traders without a Warrant of Trade are considered smugglers, and are shown no mercy from the RAFT.

Whitefaire comes with two new races: The Frostkin and the Warellama. Warellama’s are a rare  lycanthropic curse passed down through the generations. Their llama form is able to help them to quickly travel across difficult terrain, along with an increased spitting distance I would assume. However, if I were to play in this setting, I don’t think I could pass up the Frostkin. Frostkin are the natives of Whitefaire, always followed by their loyal Husky dog companion. They’re good doggos.

The sourcebook also comes with three new subclasses. The Frost Strider for Ranger, Storm Caller subclass for Wizard, and Deep Domain for Cleric. Each of these has its own setting themed fluff, with tools specifically to help you in the environment.

And hats off to the team for their implementation of snow sleds. It comes with a full rule set to purchase a sled, as well as a team of animals to pull it, each with their own speed and pulling power. While this may seem tedious to some at first, the addition of rules for sled chases and combat will quickly change your mind. The rule sets are complete enough to be functional and quick, without bogging down the game with maneuvers, reference charts, and complications. However, if that kind of thing is your jam, their rules are simple enough to add onto if you want a more tactical feel.

This sourcebook comes equipped with a great Dungeon Master’s section. It has a small number of Monsters and NPC’s that can be used in your campaign, as well as a list of specialized equipment. There’s also a great selection of adventure hooks so you can hit the ground running.

However, the best part about this section is the introductory adventure. The Blood Red Snow is an adventure for four to five 2nd level characters to the setting of Whitefaire. The adventure is seven pages, complete with two dungeon maps, creatures and flavor text. It’s a great way to jump right in the setting without a lot of prep work.

The attention to detail on the terrain, travel and environmental hazards are expanded in this section to make sure that you get the full feel of the brutality of the region. With that said, my favorite section is the snowball fight rules, which seems like a great way to have your adventurers de-stress after travel.

The Dark Peaks team has done an excellent job of creating a unique region that has its own distinct flavor while still holding to that traditional D&D feel. We’ve come to expect great things from the Dark Peaks team after we reviewed their adventure The Festival of Swords, and they delivered.

Whitefaire Adventurer’s Guide has all of the information you would need to carry out a full campaign, or more, in another region of the Faerun. It’s elegantly written with an extensive history and a dash of humor. The best part is you can grab a copy of Drive Thru RPG, starting at $9.99. 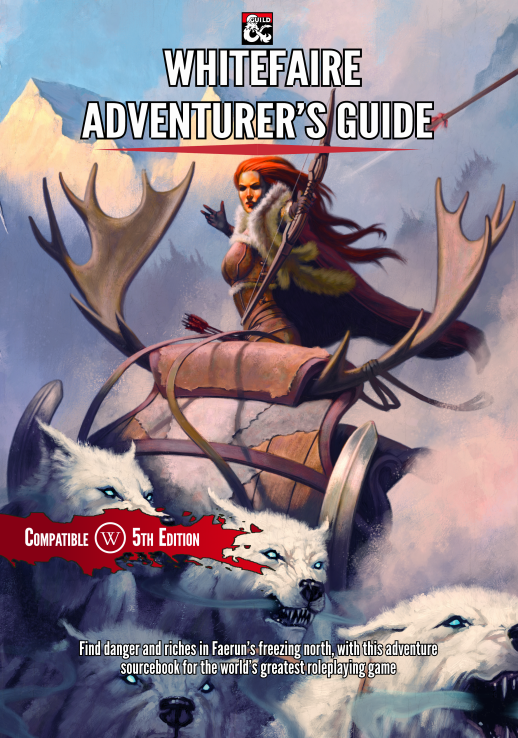